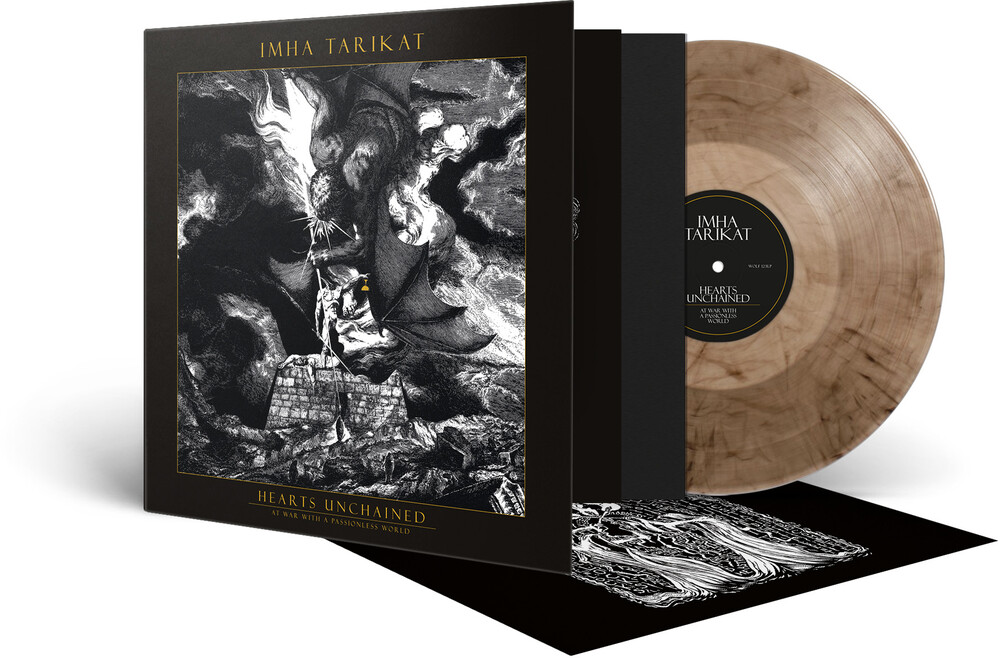 Smokey Marble. Vicious and vitriolic, full of raw anger and burning hatred, yet at the same time bursting with live and lingering on moments of astonishing beauty - IMHA TARIKAT's third album "Hearts Unchained - At War with a Passionless World" announces it's inherent contradictions and struggles already in the title. Essentially a black metal album in the crackling dry and humourless German style that renounces all bombast and often folk-ish undertones of it's Nordic counterparts, IMHA TARIKAT's lyrical and musical mastermind Kerem Yilmaz aka Ruhsuz Cellat has once again created new layers and expanded the dimensions of his unique compositions. While adding even more throat-torturing approaches to his physically violent singing style, the ferocious drumming and relentless churning of frost-covered guitar strings remain as the either ice cold or glowing hot foundations of IMHA TARIKAT. Then again, while his songs twist and turn through the black void, they sometimes take surprising detours into passionate moments and solos rather derived from heavy metal, hard and occult rock, and even a knife-tip of punk. Lyrically, IMHA TARIKAT continue to function as some kind of an encrypted diary recording Kerem Yilmaz' personal experiences, growth, and fascinations: "I literally let myself go insane to create an absolutely authentic experience", the singer and guitarist reveals about the recording process of "Hearts Unchained", which not surprisingly revolves around inner conflicts, suffering, escalating emotions, but also catharsis and redemption. IMHA TARIKAT and it's brutal black sound were created as an emotional pressure valve for it's founder, Kerem Yilmaz. His burning musical passion reveals itself in the fast progression, which with his songwriting grows remarkably into all directions with every new release. While even the first EP "Kenoboros" left an excellent impression in 2017, the band audibly conquered new grounds on the following demo "Son Mistisizm" (2018) and via the 2019 debut-full length "Kara Ihlas" and the black metal supernova album "Sternenberster" (2020) to reaching a new climax with "Hearts Unchained - At War with a Passionless World". IMHA TARIKAT are out to turn the world into a fiery spectacle and "Hearts Unchained - At War with a Passionless World" is the spark to ignite it all. Before all emotions become ash and cinder, let them burn!
Stock levels do not reflect our retail location. Available items ship directly to your doorstep from our supplier's warehouse. To check our retail stock levels give us a call at 317-259-1012'
This website uses cookies to personalize content and analyse traffic in order to offer you a better experience.
I accept Learn More
back to top