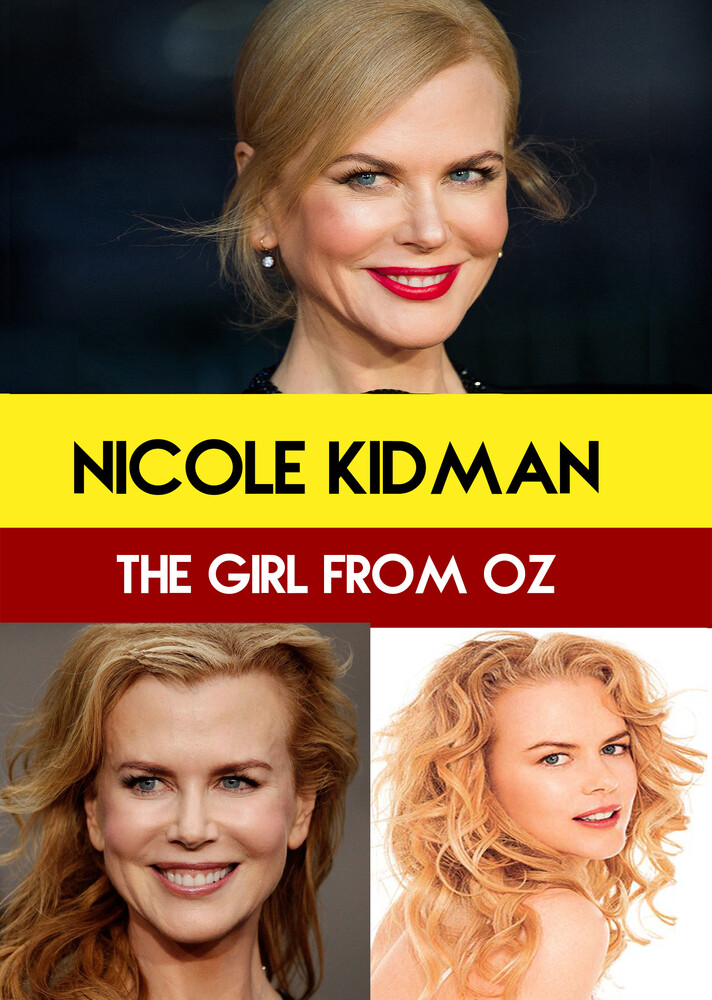 The Girl From Oz - An unauthorized story on Nicole Kidman While Australia may be a very long way from Hollywood, it has produced it's own fair share of movie icons. And with the country itself taking centre stage in Baz Luhrman's epic, Australia looks set to become just as big in Tinseltown as it's elegant, Oscar winning, homegrown star, Nicole Kidman. The actress has had ties to the USA longer than most Australian actors however, even before she met and married Tom Cruise. She was born in Hawaii to Australian parents in 1967, but later moved to Australia with her parents and spent most of her childhood and teenage years in Sydney. Her incredible focus and drive to become an actress - and a good one - led her to roles in BMX Bandits and Bush Christmas. Then at the age of 22 she starred with Sam Neill in Dead Calm - a role that would capture the attention of both Hollywood and her future husband, with whom she would make the movie Days of Thunder. The couple were married on Christmas Eve, 1990, and made their first movie together as a married couple - Ron Howard's Far and Away - before calling it quits almost ten years later. During that time she'd become a mother to adopted children Connor and Isabella, and also strived to ensure that she wasn't just known in Hollywood as Mrs. Tom Cruise; starring in To Die For with Matt Dillon. She played a woman who wanted to be a newscaster and would do literally anything for her career - even killing her husband! The role saw her win a Golden Globe award for Best Actress in 1996. Sometimes the public's perception of Nicole Kidman has seemed to shift over the years, from being the public's darling, as she was after the split with Tom Cruise, to being thought as cool and aloof; a bit of an ice princess. Her choice of roles certainly hasn't done much to quell the ice princess tag, either. In Malice she played a manipulative vixen whom seemed to care about nothing but money; opposite Billy Baldwin. She followed it up with roles in Practical Magic, Portrait of a Lady and then starred alongside her husband for the final time in Stanley Kubrick's Eyes Wide Shut. But despite the hype, the film was panned by critics who called it cold, and slow. It's a film about cracks in a marriage and how they show themselves - but who would have predicted that not long after, the Cruise marriage itself would be over? Despite a divorce that was anything but private, Nicole just kept on keeping on. She showed the world she could sing and dance, in Moulin Rouge alongside Ewan McGregor, then recorded the single "Something Stupid" with Robbie Williams in Christmas of 2001. Moulin Rouge won her a Golden Globe in 2002, causing a resurgence of musicals to be made in Hollywood, like Chicago and Rent. Nicole's next role would be in The Others, a terrifying tale of a mother living with her children in a haunted mansion. She followed it up with Birthday Girl about a Russian mail order bride. If transformations were becoming her forte, Nicole then upped the ante with an Oscar-winning performance as Virginia Wolf in The Hours, alongside Meryl Streep and Julianne Moore. This time, it was her appearance that was changed, so much so that she was almost unrecognizable. In recent years Nicole Kidman's private life has taken center stage, with a much publicized romance with country singer Keith Urban which resulted in marriage, and even more recently, the birth of her first natural child - a daughter, Sunday Rose. As the film Australia premiered in November of 2008 she announced that it may be her last film, as her role as a mother was her top priority. But even if it does turn out to be the last time we see the gorgeous, elegant actress on film, we have an extensive catalogue of movies to remind us of the talent Australia - the country, not the movie - can produce! Bonus Extras UNIFEM and Kidman Margot and Golden Compass Keith Urban Australia, the movie UNIFEM and Kidman - In 2006 she signed on with the United Nations as a Goodwill Ambassador, advancing women's rights worldwide. Margot and Golden Compass - Kidman is now in the position most aspiring actor's dream of; and that is to pick and choose the roles that interest her. The Golden Compass was one of them; Margot at the Wedding was another. Keith Urban - while Nicole was blazing a trail through Hollywood, her future husband was making a name for himself in Nashville, Tennessee. The New Zealand born country singer grew up in Australia where he learned guitar and found he had natural ability, winning talent shows and embraced country music early on, meshing it with the rock 'n roll he also loved to find a sound that was uniquely his. Australia, the movie - Nicole has starred in many Hollywood blockbusters, but none have been as keenly anticipated as Baz Luhrman's epic Australia, in which she plays a woman who inherits a cattle station and falls in love with Hugh Jackman's character, a stockman who helps when her land is under threat from a takeover plot.