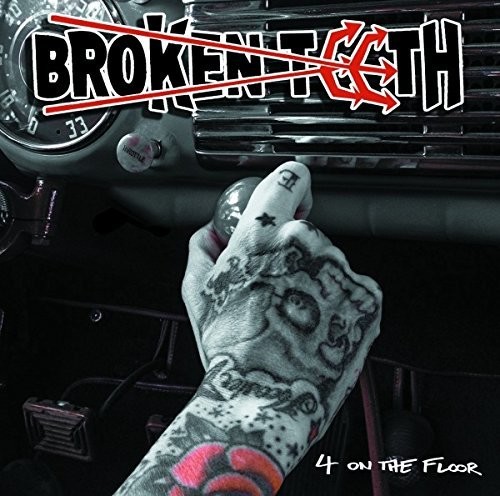 2017 release from the hard rockers. Twenty years after seizing power in Austin, Texas, rock-roll battering squad Broken Teeth throw it's hardest punch ever after signing with Megadeth bassist David Ellefson and former Corporate Punishment President Thom Hazaert at their powerhouse EMP Label Group. "I've had my eyes and ears on Broken Teeth for a few years now and have a history with singer Jason McMaster," Ellefson said. "It was only a matter of time until I found a way to partner with them. Given their reputation as a crushing live act, along with their previous string of classic, underground hard-rock albums, I couldn't be more proud to welcome Broken Teeth to the EMP family and help them share their music with an even wider audience." Once described as "a pissed-off AC/DC," Broken Teeth has evolved into a hard-rock/heavy metal bomb blast built on the swaggering boogie of bad-boy blues. Not surprisingly, 4 On The Floor continues the band's gritty legacy with odes to the rebellious, forbidden love of rock-n-roll (the slow-stomping "Sinful"); standing proud as a loner (the riotous burner, "House of Damnation"); life on the rock-n-roll highway to hell (the bluesy shuffle of "Borrowed Time"); and the ultimate salute to legendary Motorhead main man, Lemmy Kilmister (the appropriately rollicking "Never Dead," which was written before Lemmy's passing). "We don't really do tributes, but Lemmy and the kind of rock-n-roll he did is what we're all about," said Broken Teeth guitarist Jared Tuten. "It just felt right for Broken Teeth to immortalize him forever."