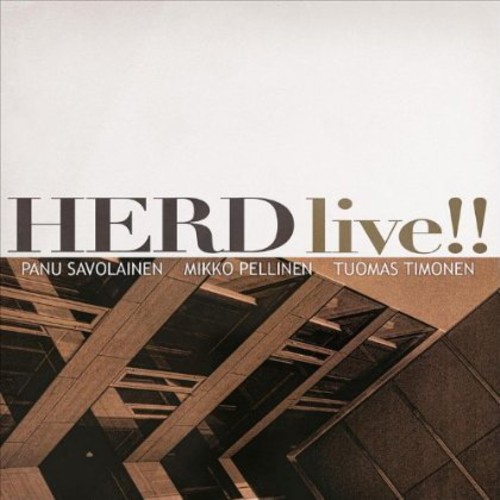 Herd Panu Savolainen, vibraphone Mikko Pellinen, bass Tuomas Timonen, drums The awarded trio Herd is one of the most potent newcomers in the Finnish jazz scene recently. A local live favourite for already a couple of years, "Herd Live!!" marks their welcome debut on record. The eight-track album was recorded live in February during the band's tour produced by the Finnish Jazz Federation. As the resulting recording goes to show, the stage is where this young combo really shines. Herd includes vibes man Panu Savolainen, bass player Mikko Pellinen and drummer Tuomas Timonen, each of whom rank among the top jazz talent in Finland these days. The trio has formed a remarkably unified band sound thanks to their extensive gig schedule lately, a fact which was also noted by the jury of the prestigious "European Jazz Competition" at the North Sea Jazz festival. Herd went home with the first prize of the competition's 2011 edition. Additionally, Herd served as the "house band" for Finland's star-studded Pori Jazz festival in 2010, where Panu Savolainen was also noted as the "Artist of the Year" by the festival organisation. The award granted to Herd by the North Sea Jazz festival takes a concrete form with the present release. The band found good use of the prize of 5000 EUR in financing their debut album, which now seems like a very wise move. The tight trio unit is heard on the recording on top form, further unified by the busy touring schedule at the time of the recording. It is easy to get caught up in Herd's effortlessly swinging sound by listening to the live recordings. It is presicely their brand of natural no-nonsense groove and swing which shines bright on the album, together with the mature sound of the band and the interplay of the three musicians. Each of the young players has enough room to shine, while the focus is firmly kept in forming a focused and constantly evolving trio sound. It seems evident that Herd is already on their way to national jazz stardom in the vibrant Finnish scene. What's more, they have a good shot at making something happen internationally as well, as witnessed by their recent competition success. "Herd Live!!" is an early step for the band on their way up, and indeed a very convincing one at that.