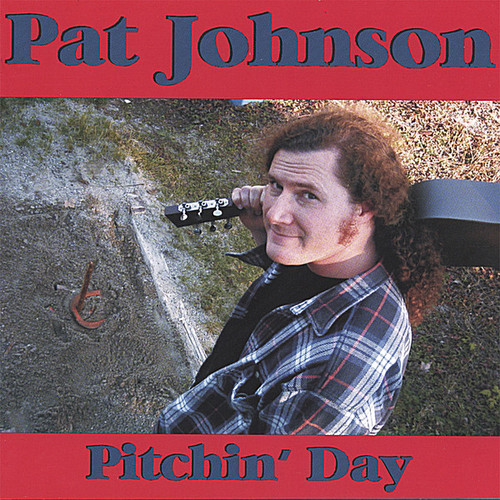 'Pat Johnson's 'Pitchin' Day' is the kind of CD release radio stations love to receive...great tunes from beginning to end, wonderful musicianship, and fantastic sound quality. Pat is a passionate musician who is fiercely committed to the music that he plays, and it shows every time he picks up his guitar.' - Joel Hurd, Production Manager, North Country Public Radio While growing up down on the farm in rural Eastern Ontario, Pat asked his folks for a guitar. So, one day after school got out, they took him off to the local department store, where some deep thinker advised mom and pop that Pat should probably be taking piano lessons before bothering with any electric twanger. One "To hell with that! I wanna be Elvis, not Liberace!" later and Pat and his parents were back in the car, guitarless. This didn't stop Pat, though. He continued to nourish a love for all things guitar through high school and university, where he became known in residence as "that guy always cranking The Who, Tom Petty, and Van Halen." As soon as he freed himself from the bondage of academia, he bought a guitar with his first cheque from his first job, immediately began music lessons, and was promptly bitten by the songwriting bug. Fast forward 15 years and Pat is still playing and writing jangly, guitar-driven folk-rock and acoustic blues. He still lives in Eastern Ontario, albeit now in a hamlet called Charleston between Ottawa and Kingston, but he's come a long way from that first guitar. He has now become a guitar teacher himself, both locally and with both the prestigious National Guitar Workshop in New Milford, Connecticut and the premier Internet music instruction site, WorkshopLive.com. His debut instruction book, Beginning Fingerstyle: Arranging and Technique for Guitar was released in 2005 on the Alfred Publishing imprint. Pat has also built a following by playing upto 80 gigs a year since the late 1990s. He released his debut CD in 2003, Songs from the Town Boredom Built, and has just followed it up with Pitchin' Day, which has a rural rock feel somewhere between Mississippi John Hurt and Tom Petty, or Mance Lipscomb and Stephen Stills. The 12 original songs on the new disc are: 1. Old Velvet Nose - full band folk-rock tribute to Warren Zevon 2. Another Day - folk-rock ode to country living 3. She's Got to Go - old-school country with a smirk 4. Baby Surely Do - Delta blues vibe with bottleneck guitar and electric mandolin 5. Crime For this Scene - songwriting is cheaper than therapy 6. Broken Tooth - the result of a bad day hunting for gigs 7. Pitchin' Day - good times around the horseshoe pit 8. PC Blues - the "I hate my computer" blues 9. Big Box Store - lamenting the decline of the Mom & Pop store 10. Bloody Tears - somebody's always cryin' 11. Mr. C's Blues - instrumental acoustic blues featuring lap-steel guitar 12. Why Are You So Mean? - chances are you know somebody who could have inspired this song.
This website uses cookies to personalize content and analyse traffic in order to offer you a better experience.
I accept Learn More
back to top