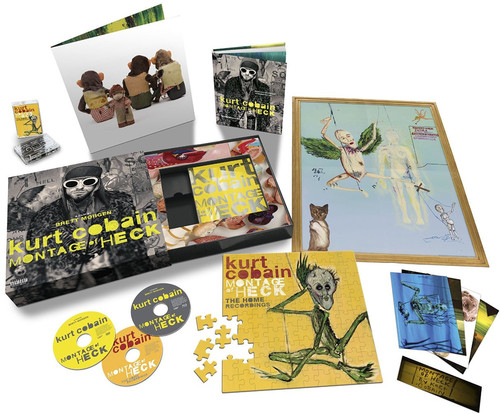 Hailed as one of the most innovative and intimate documentaries of all time, experience Kurt Cobain like never before in the only fully authorized portrait of the famed music icon in KURT COBAIN: MONTAGE OF HECK. Acclaimed filmmaker Brett Morgen expertly blends Cobain's personal archive of art, music, never-before-seen movies, animation and revelatory interviews from his family and closest friends. Wildly creative and highly praised, the documentary follows Kurt from his earliest years in this visceral and detailed cinematic insight of an artist struggling to come to terms and make sense of his place in the world.

KURT COBAIN: MONTAGE OF HECK SUPER DELUXE EDITION includes the two hour plus, full-length feature film and 48 minutes of bonus interviews on Blu-ray and DVD, a 31 track deluxe soundtrack on CD and cassette, a 160-page hardbound book with extended interviews and images from the Cobain archive, a puzzle with a collectable storage container, movie poster, postcards and bookmark. The 31 track deluxe soundtrack CD is exclusively available in the Super Deluxe Edition and showcases tracks from the documentary including spoken word, demos and full songs.

The soundtrack is comprised from various early and raw cassette recordings made by Kurt alone, the soundtrack allows a rare, unfiltered glimpse into Cobain's creative progression from early song snippets and short demos to musical experiments and ultimately, pieces of songs or lyrics that eventually appeared on later Nirvana albums.