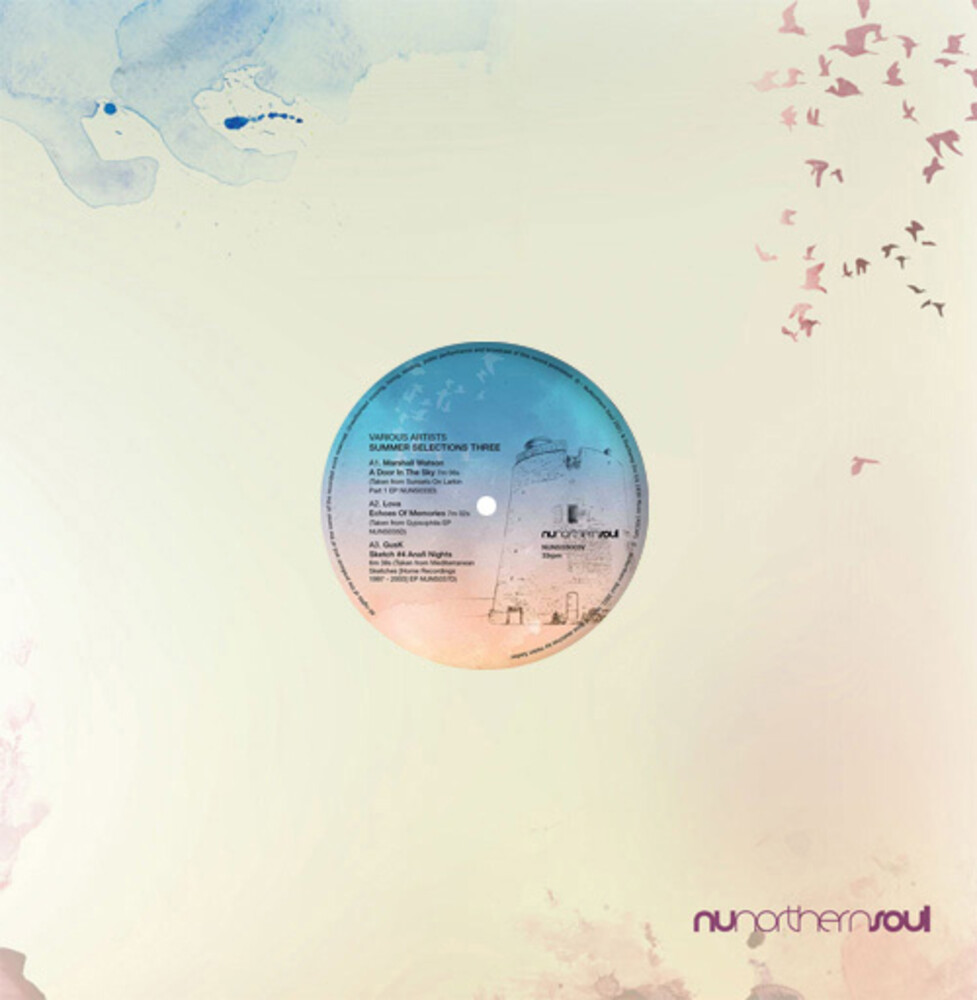 Over the last few years, NuNorthern Soul has established a number of traditions, most nota-bly annual releases that provide a snapshot of the label's output while also considering their suitability for certain seasons. Perhaps the most popular is founder Phil Cooper's Summer Selections series, which each year showcases warm and sunny gems mined from a range of forthcoming releases. The 2021 edition of the sampler, the third in total, may well be the best yet. Six tracks deep and as subtly varied as you'd expect, the entertaining set features tracks from a mixture of exciting newcomers, experienced producers and long-time members of the NuNorthern Soul family. To kick things off, Cooper introduces us to Marshall Watson, an American producer who lat-er in the year will release two five-track EPs on the label. 'A Door To The Sky', which will feature on the Sunsets On Larkin Part 1 EP, is sumptuously sun-kissed, with delay-laden elec-tric guitar textures and sparkling electronics reclining over a tactile electronic groove. LOVA's 'Echoes of Memories', the track that follows, recalls the atmospheric, synthesizer-sporting new age Balearica popularised by Quiet Force in the late 1980s. The Italian producer was signed after bringing a USB stick of productions to one of Phil Cooper's gigs in Ibiza; his Gypsophilia EP will be one to check when it drops later in the year. Gusk's 'Sketch #4 - Anafi Nights' is seductive and exotic. It's a crackling and atmospheric musical painting that daubs starry stabs and yearning melodies atop a bubbly, lo-fi drum machine beat. It provides a perfect snapshot of the Greek musician's Mediterranean Sketches EP, which gathers together home recordings made between 1997 and 2003. Arguably even more immersive and enveloping is 'Aqua Blancas Sunrise' by Tambores en Benirras, the musical project of Cumbrian selector DJ Gripper. A slow-burning delight full of intricate musical flourishes -think drifting female vocalizations, Indian-influenced percussion, twinkling pianos and haunting clarinet motifs the track is one of the many highlights on the Barrow in Furness based producer's forthcoming debut album for NuNorthern Soul. To round things off, Cooper has chosen to offer-up cuts from two very experienced artists. George Solar (real name Georg Boskamp) is an Ibiza-based German producer who has been collaborating and releasing music since the late 1980s. 'Infrared', his contribution to Summer Selections 3, is a languid and glassy-eyed slab of slow-motion Balearic dub. His Los Ra-yos Del Sol EP will be one to look out for later in the year and is his debut solo release. The sampler's final missive fittingly comes from long-time friend of the family B.J Smith, a regular contributor to NuNorthern Soul releases who has reunited with Huw Costin - a vocalist he previously worked with on Smith & Mudd releases for Claremont 56 for a double A side single due later in 2021. 'Sun When You Come' is as warming and hazy as you'd expect and features Costin's emotive, reverb-laden vocals and mazy electric piano solos rising above a suitably horizontal groove. It provides a stunning, sunset-ready conclusion to another superb set of Summer Selections.