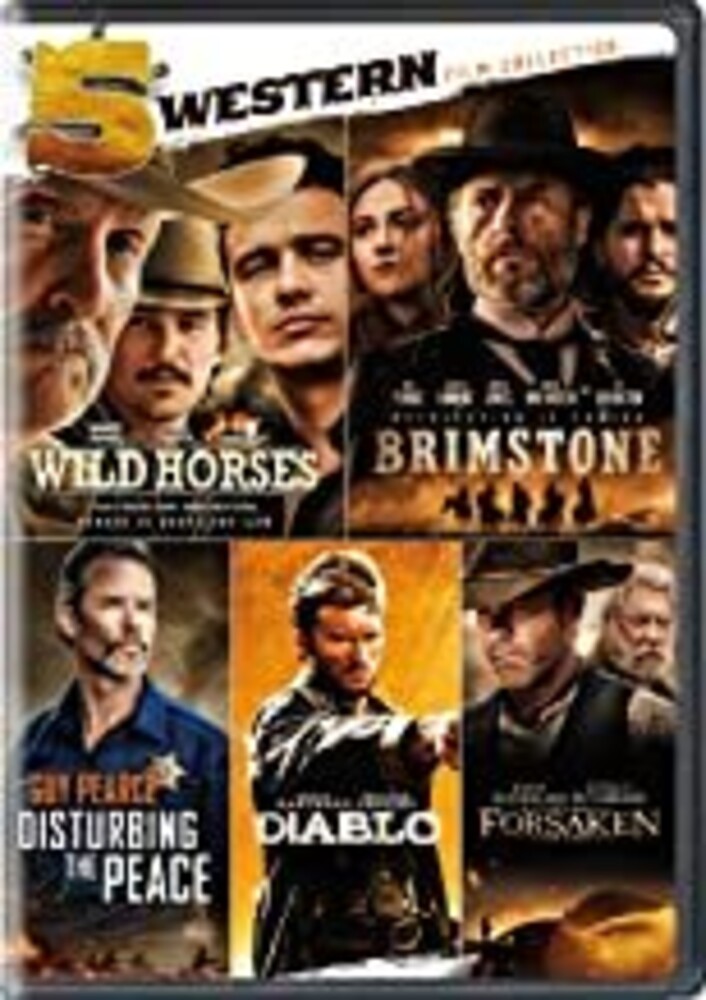 Five-disc set includes: Wild Horses (2015)Aging Texas rancher Scott Briggs (Robert Duvall, who directed and co-wrote) contrived an uncomfortable return home for his son Ben (James Franco), who was run off 15 years ago after coming out to his father. When a local Ranger (Luciana Pedraza Duvall) re-opens a disappearance case that occurred at the time of the Briggs' estrangement, she might regret looking into the depth of the family's secrets. Josh Hartnett, Jim Parrack, Adriana Barraza also star. 104 min. C/Rtg: NR Forsaken (2015)After years away fighting the Civil War-and then, establishing notoriety as a dreaded gunslinger-John Henry Clayton (Kiefer Sutherland) returned to his Wyoming hometown in search of a peaceful existence. His estranged preacher father (Donald Sutherland), however, isn't buying into it... and the dealings of a local landgrabber (Brian Cox) and his hired thugs might leave him no choice than to return to violence. Effectively old-school sagebrusher co-stars Demi Moore, Michael Wincott, Landon Liboiron. 89 min. C/Rtg: R Diablo (2015)Still haunted by his combat experiences, a Civil War veteran (Scott Eastwood) tries to start a new life with his wife (Camilla Belle) as a settler. But when outlaws burn down their home and abduct Belle, Eastwood is forced to set out on a mission of bloody vengeance. Walton Goggins, Adam Beach, and Danny Glover also star in this moody and compelling frontier drama. 82 min. C/Rtg: R Brimstone (2016)Mute midwife Liz (Dakota Fanning) thought she had settled into a quiet life with her husband, daughter, and stepson in their remote frontier community. However, the town's charismatic new preacher (Guy Pearce) has a less than holy secret-he's been stalking her for years-and when his determination becomes violent, she knows that the time's come to stand her ground. Remarkable, Netherlands-shot sagebrush suspenser co-stars Kit Harington, Carice van Houten, Emilia Jones, Carla Juri. 148 min. C/Rtg: R Disturbing The Peace (2020)A decade after his tenure with the Texas Rangers came to a violent and controversial end, local marshal Jim Dillon (Guy Pearce) refused to carry a gun as he kept order in his sleepy Lone Star town. When a sociopathic biker (Devon Sawa) and his gang roll into town and terrorize the populace, the lawman turns to cunning to try and take them out one by one... but the overwhelming odds might have to force his hand. Gripping actioner co-stars Michael Sirow, Michael Bellisario, Barbie "Kelly Kelly" Blank. 90 min. C/Rtg: R