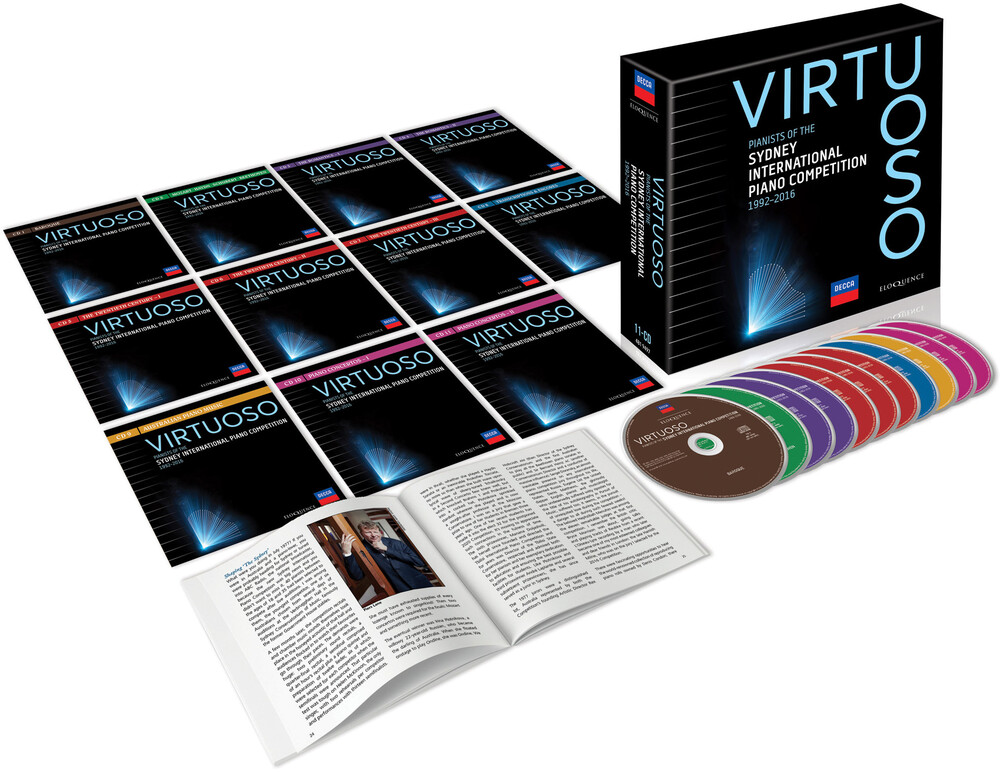 Described by The Australian as 'a boon for lovers of the piano and those keeping an ear on exciting musical talent', the Sydney International Piano Competition (The Sydney) has become a fixture on the classical music landscape. This unique retrospective chronicles more than 100 fascinating performances. They were recorded by 77 pianists during seven events over two decades (1992-2016). Over it's 14 hours, the eleven CDs in this Limited Edition encompass music by more than 55 composers from Agnew to Zaderetsky and the anthology is organized in seven categories: Baroque, Classical, Romantic, Twentieth Century, Transcriptions & Encores, Australian Piano Music and Piano Concertos. Anyone who has followed The Sydney will recognize the excitement, the fever pitch as this great quadrennial festival of pianism heads towards the final rounds. This set provides the listener then with a cornucopia of pianism. You can hear lyrical grace in so many of the Scarlatti sonatas, and particularly Rustem Khairutdinov's 1992 performance of the D minor, Kk.9. Poise and rapt stillness informs Roberto Cominati's 1996 Debussy (Images - Book II), and the clarity of voicing is carried through in his performance of Rachmaninov's Third Piano Concerto, where, you're swept away with the excitement, but hear all the notes! Excitement is to be found on virtually each disc in the set, but particularly in the 'Transcriptions & Encores' volume, as well as in the Rachmaninov and Sancan performances by Olivier Cazal, Yuki Takao's Hexentanz (Macdowell), and Tatiana Kolesova's Petrushka pieces. The anthology also gives us the opportunity to experience Australian piano music as interpreted by a range of pianists from, among others, countries like Russia, Canada, China, the United States, Sweden and Japan (and, of course, Australia). Many are called, few are chosen, as the saying goes, but the philosophy in putting together this collection was purely the merit of an individual performance, no matter which stage it's performer reached in the event. Therefore, it matters little as to where individuals participating in this competition may be now. Fate and time have their own plans for participants and their future paths. But playing that is as good, unique and memorable as that here represented is worthy of preservation. As a snapshot of some outstanding playing across several Sydney winters, this collection is sure to entertain those unfamiliar with the performers and bring back memories for those who were there. The booklet includes full recording details, and introduction by The Sydney's chairman Virginia Braden, and notes by Piers Lane (Artistic Director of The Sydney), and Cyrus Meher-Homji, who initiated a long-running series of recordings from The Sydney from 1992 onwards and curated this boxed set.